How Chatbots Are Transforming Education

In the future, chatbots may be essential to freeing up teachers and administrators to perform the kind of work humans do best.

A few years ago I attended a hackathon hosted by a major education company who were looking to unearth innovations to transform the way medical education is delivered. Hundreds of attendees worked frantically over the weekend, and the winning team, who were called Patient X, were finally announced. They had developed a platform to allow medical students to practice their clinical reasoning, with live feedback provided to them via chatbot technology.

The project represented one of the first forays into chatbot technology in an educational context, and as research from UOC Seu de Barcelona illustrates, despite this apparent promise, progress has been measured since then.

Nonetheless, they identify a number of clear use cases, most of which revolve around the ability for the technology to be available to students around the clock, thus reducing the need for teachers and support staff to answer the more repetitive and time-consuming questions students may have.

They describe a future in which human teachers produce personalized instruction to students, with AI-based chatbots then providing live and uninterrupted support. It's a clear division of the irregular tasks that still require the unique capabilities of a human and the frequent and repetitive tasks for which AI technology is so strong.

"This symbiosis would allow the human teacher to stop taking on more mechanical or repetitive tasks—which would be undertaken by the chatbot or AI teacher—and would consequently have greater availability to devote their time to more creative and high cognitive level tasks," the authors explain.

One such platform is Botsify, which provides users with personalized content in the form of images, videos, or text to help them learn a topic before allowing them to test their knowledge via a series of quizzes. All of the data from the platform is made available to its teachers so that progress can be easily monitored.

Chatbots are also being deployed to provide smarter, more intuitive feedback to students about the progress they’re making. Feedback is vital to the learning process, not only in helping the student gauge their progress but also to help them identify areas of weakness in their knowledge. Chatbots are making the process more authentic and engaging. Hubert is one such chatbot, and it allows students to interact not only on the subject matter of their course but also on the structure of the course itself, thus providing students with a channel by which they can provide feedback to the school itself. 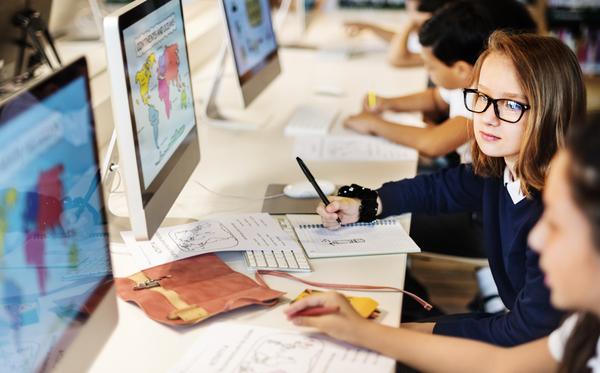 What is the place of technology in the classroom?

Similarly, chatbots are being used to help students to collaborate effectively, whether with their school, their tutors, or their fellow pupils. For instance, the Genie Chatbot was developed by Deakin University in Australia to answer questions students have about life on campus.

The potential for chatbots to facilitate peer-to-peer communication was underlined by a new study from Penn State, which followed several hundred students from the university’s World Campus who had enrolled on an online Slack community to communicate and collaborate among themselves.

The Slack community had a chatbot installed that was designed to prompt and facilitate discussions among the students, each of whom was asked by the researchers to complete a survey before joining and at the end of the study. A control group, who weren’t given access to the Slack community, were also quizzed at both points.

The survey showed that those with access to the community felt a greater sense of belonging with both their peers and their school than those in the control group. It’s a feeling that the researchers believe is crucial to the success of the students in their studies.

When the students were interviewed afterwards, it emerged that they were able to gain a better understanding of their fellow students through the online community, with these connections providing help and support for their studies and collaboration partners for joint work.

“When learners feel [connections as a result of] this social integration, it is more likely that they will want to stay [in the program],” the researchers explain. “It’s very important for us to build this social integration, not only on the instructor side but also on the technology side. The whole ecosystem should work together for this belongingness for online learners to feel like they are part of the community and that people are supporting them.”

These provide just a few of the ways in which chatbots are being deployed in education today. It's almost certainly true that chatbots are never going to replace the teacher but rather will augment the work they do by performing some of the low-level cognitive and repetitive tasks that take up so much teaching time today. The chatbot is effectively a colleague of the teacher and administrator rather than a replacement of them.

We see so many headlines speculating about the number of jobs that will be lost to AI-based technologies, but as far as chatbots are concerned, it will almost certainly be a case of augmenting the work teachers do rather than replacing them. Whether it's answering administrative questions, correcting exercises, or supporting collaboration, there are tasks that are clearly weighted towards technological operation, thus freeing up teachers and administrators to perform the kind of work humans do best.